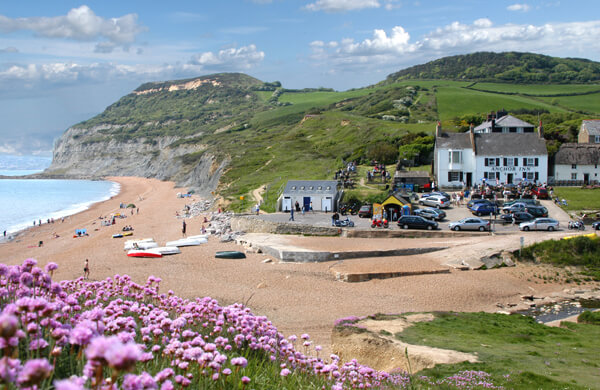 In fact, over half the County is designated as an area of outstanding natural beauty.

So the chances are, you’ll either be living in an officially designated area of natural beauty, or you’ll be very close by to one.

Meanwhile, the harbours of Poole, Portland and Christchurch offer a great variety of water sports, from kite surfing to paddle boarding.

And if you’re looking to get your heart racing, you could always try high speed RIB rides, rock climbing, coasteering, or even the zip wire that runs off the end of Bournemouth Pier!

A place to call home.

Bournemouth is the most vibrant city in the county, with a nightlife that’s second to none and a popular destination for hen and stag parties. The city is equally popular with day-trippers, drawn to its family atmosphere and traditional seaside setting.

Meanwhile the historic market towns of Dorchester, Weymouth and Lyme Regis are bursting with places to eat, drink and shop, combining historic architecture with contemporary art and culture, as well as that unique blend of special Dorset charm.

Bridport is a market town in Dorset, England, situated approximately 1.5 miles (2.4 km) inland from the English Channel near the confluence of the small River Brit and its tributary the Asker. Its origins are Saxon and it has a long history as a rope-making centre, though many of its buildings date from the 18th century.

On the coast and within the town’s boundary is West Bay, a small fishing harbour previously known as Bridport Harbour.

In the 21st century Bridport’s arts scene has contributed to the town becoming increasingly popular with people from outside the locality. It has an arts centre, theatre, library, cinema and museum, and several annual events. It features as Port Bredy in the fictional Wessex of Thomas Hardy’s novels.

In the 2011 census the population of Bridport’s built-up area was 13,568. The town is twinned with Saint-Vaast-la-Hougue, France.

Bournemouth is a large coastal resort town on the south coast of England directly to the east of the Jurassic Coast, a 96-mile (155 km) World Heritage Site. According to the 2011 census, the town has a population of 183,491 making it the largest settlement in Dorset. With Poole to the west and Christchurch in the east, Bournemouth forms the South East Dorset conurbation, which has a total population of over 465,000.

Before it was founded in 1810 by Lewis Tregonwell, the area was a deserted heathland occasionally visited by fishermen and smugglers. Initially marketed as a health resort, the town received a boost when it appeared in Dr Granville’s book, The Spas of England. Bournemouth’s growth really accelerated with the arrival of the railway and it became a recognised town in 1870. Historically part of Hampshire, it joined Dorset with the reorganisation of local government in 1974. Since 1997, the town has been administered by a unitary authority, giving it autonomy from Dorset County Council although it remains part of the ceremonial county. The local council is Bournemouth Borough Council.

The town centre has notable Victorian architecture and the 202-foot (62 m) spire of St Peter’s Church, one of three Grade I listed churches in the borough, is a local landmark. Bournemouth’s location has made it a popular destination for tourists, attracting over five million visitors annually with its beaches and popular nightlife. The town is also a regional centre of business, home of the Bournemouth International Centre or BIC, and a financial sector that is worth more than £1,000 million in Gross Value Added.

Dorchester is the county town of Dorset, England. It is situated between the towns of Poole and Bridport on the A35 trunk route. A historic market town, Dorchester lies on the banks of the River Frome, in the Frome Valley, just south of the Dorset Downs and north of the South Dorset Ridgeway, that separates the area from Weymouth, 7 miles (11 km) south.

Dorchester was the home and inspiration of the author Thomas Hardy, whose novel The Mayor of Casterbridge was based on the town.

Weymouth is a seaside town in Dorset, England, situated on a sheltered bay at the mouth of the River Wey on the English Channel coast. The town is 11 kilometres (7 mi) south of Dorchester and 8 kilometres (5 mi) north of the Isle of Portland. The town’s population is 52,323 (2011). The town is the third largest settlement in Dorset after the unitary authorities of Bournemouth and Poole.

Weymouth is a tourist resort, and its economy depends on its harbour and visitor attractions; the town is a gateway situated halfway along the Jurassic Coast, a World Heritage Site on the Dorset and east Devon coast, important for its geology and landforms. Weymouth Harbour is home to cross-channel ferries, pleasure boats and private yachts, and nearby Portland Harbour is home to the Weymouth and Portland National Sailing Academy, where the sailing events of the 2012 Olympic Games and Paralympic Games were held.

The A354 road bridge connects Weymouth to Portland, which together form the borough of Weymouth and Portland. The history of the borough stretches back to the 12th century; including involvement in the spread of the Black Death, the settlement of the Americas, the development of Georgian architecture, and preparations for World War II.

Lyme Regis is a coastal town in West Dorset, England, situated 25 miles (40 km) west of Dorchester and 25 miles (40 km) east of Exeter. The town lies in Lyme Bay, on the English Channel coast at the Dorset–Devon border. It is nicknamed “The Pearl of Dorset.” The town is noted for the fossils found in the cliffs and beaches, which are part of the Heritage Coast—known commercially as the Jurassic Coast—a World Heritage Site.

The harbour wall, known as “The Cobb”, features in Jane Austen’s novel Persuasion, and in The French Lieutenant’s Woman, a novel by British writer John Fowles, as well as the 1981 film of the same name, which was partly filmed in Lyme Regis.

The town was home to Admiral Sir George Somers, its one-time mayor and parliamentarian. He founded the English colonial settlement of the Somers Isles, better known as Bermuda. Lyme Regis is twinned with St. George’s, Bermuda. In July 2015 Lyme Regis was also ‘tripled’ with Jamestown, Virginia to form the Historic Atlantic Triangle between Lyme, St George’s and Jamestown.

Poole is a large coastal town and seaport in the county of Dorset, on the south coast of England. The town is 33 kilometres (21 mi) east of Dorchester, and Bournemouth adjoins Poole to the east. The local council is Borough of Poole and was made a unitary authority in 1997, gaining administrative independence from Dorset County Council. The borough had a population of 147,645 according to the 2011 census, making it the second largest settlement in Dorset. Together with Bournemouth and Christchurch, the town forms the South East Dorset conurbation with a total population of over 465,000.

Human settlement in the area dates back to before the Iron Age. The earliest recorded use of the town’s name was in the 12th century when the town began to emerge as an important port, prospering with the introduction of the wool trade. In later centuries the town had important trade links with North America and at its peak in the 18th century it was one of the busiest ports in Britain. During the Second World War, the town was one of the main departing points for the D-Day landings of the Normandy Invasion.

Poole is a tourist resort, attracting visitors with its large natural harbour, history, the Lighthouse arts centre and Blue Flag beaches. The town has a busy commercial port with cross-Channel freight and passenger ferry services. The headquarters of the Royal National Lifeboat Institution (RNLI) are located in Poole, and the Royal Marines have a base in the town’s harbour. Despite their names, Poole is the home of The Arts University Bournemouth, the Bournemouth Symphony Orchestra and a significant part of Bournemouth University.

With it’s rocks and fossils uncovering stories from our ancient past, the Jurassic Coast is the only natural World Heritage Site in England

Dorset is full of festivals.

And if you’re feeling energetic, you could even join the Bournemouth Marathon Festival! 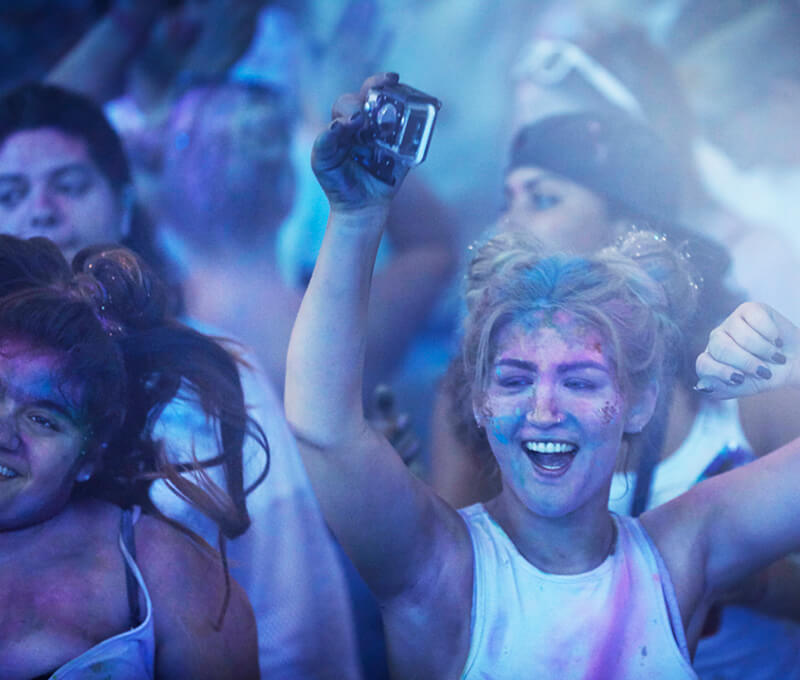 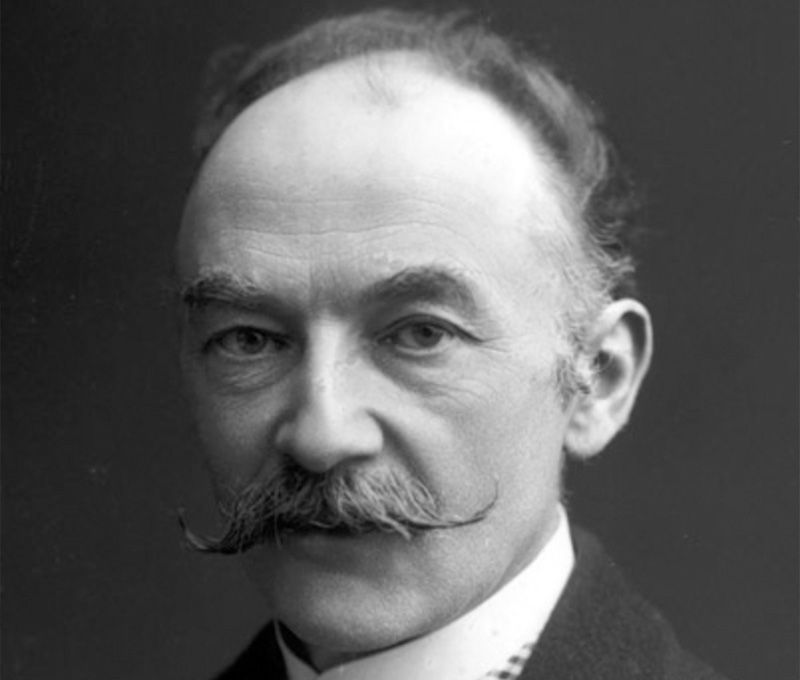 Inspiration for the arts

Over the centuries, artists and writers of all disciplines have drawn inspiration from the Dorset landscape.

The list of literary masters includes Thomas Hardy, Jane Austen and Enid Blyton. This trend has followed through into popular culture, notably so when West Bay provided the backdrop to the award-winning TV drama ‘Broadchurch’.

Dorset truly had a summer to remember in 2012 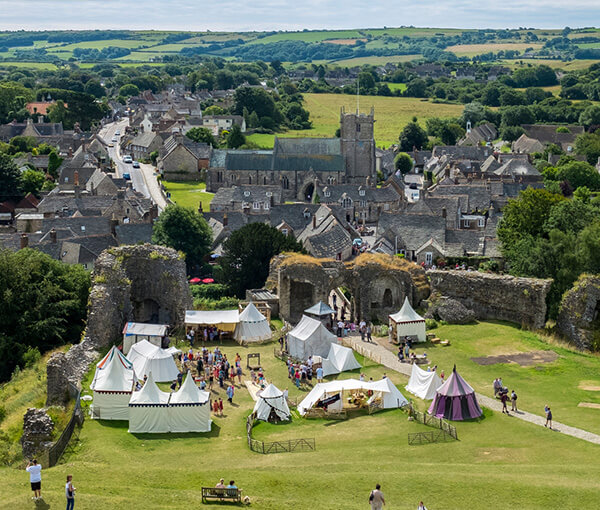 If we’re happy, it usually means we live longer.

Dorset tops the tables for the highest life expectancy in Britain.

According to the Office for National Statistics, if you live in Dorset you can expect to live for almost four years longer than the national average.

This is helped in no small part by the wide range of leisure and outdoor pursuits available across the region. The New Forest National Park is just a short journey across the border into Hampshire, offering an ideal environment for cycling, horse riding and Nordic walking.

Ready to make a move?

Do you think you can help make a difference?